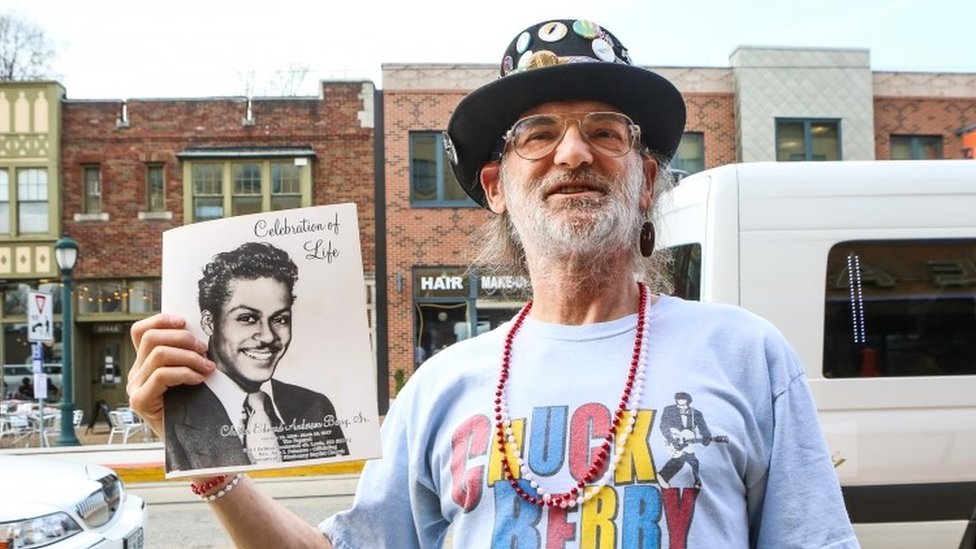 Fans in the US state of Missouri have been paying their final respects to the rock ‘n’ roll legend Chuck Berry who died last month aged 90.

They were allowed to view the performer’s body at the Pageant club in St Louis before a private family funeral on Sunday.

As fans filed past the open coffin a musician played some of Chuck Berry’s greatest hits.

The guitarist and songwriter died in Missouri after a seven-decade career.

Among those paying tribute to the musician on Sunday was Kiss rocker Gene Simmons.

“He captivated audiences around the world,” the letter said, “and his music spoke to the hopes and dreams we all had in common.

“Me and Hillary grew up listening to him.” Berry played at both of Bill Clinton’s presidential inaugurations.

As the private service for Berry began, the Rev Alex Peterson told the crowd that the aim of the day was “to celebrate Berry in a rock ‘n’ roll style”.

“We’re not going to sit here and be sad,” Mr Peterson was quoted by the St Louis Post-Despatch as saying.

As fans earlier filed past the open coffin – which had a red Gibson guitar bolted to the lid – a musician played some of the dead star’s most memorable compositions, including Johnny B Goode, Sweet Little Sixteen and Roll Over Beethoven.

Among the floral arrangements was one in the shape of a guitar sent by the Rolling Stones.

Seen as one of the fathers of rock ‘n’ roll, Berry influenced generations of succeeding musicians, most notably The Beatles, the Rolling Stones and the Beach Boys.

Berry was known for trademark four-bar guitar introductions and quickfire lyrics that reflected the rebelliousness of 1950s teenagers.

He received a lifetime achievement Grammy in 1984 and was among the first inductees to the Rock and Roll Hall of Fame in 1986.

He went on to score a succession of hits that were aimed at adolescent audiences, transcending the colour bar that plagued many black artists of his generation.

Ewan McGregor in no rush to direct again...