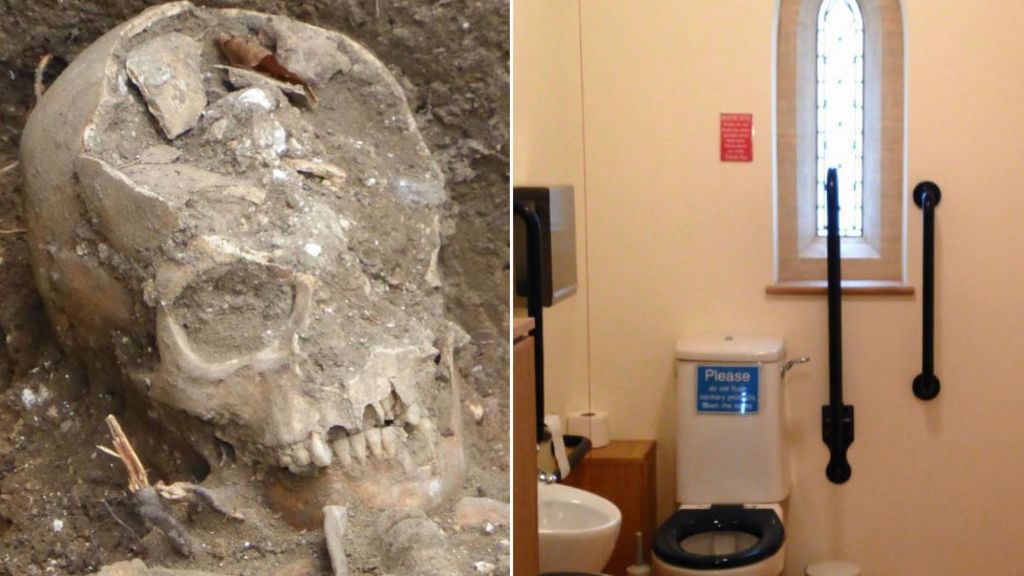 Parishioners had to wait for their new toilet after skeletons dating from as far back as the Anglo-Saxon era were unexpectedly found at a church.

Some 40 graves lay just 45cm (18in) below a path outside Holy Trinity Church in Hildersham, Cambridgeshire.

The toilet has now been completed and the skeletons laid in a new grave.

Holy Trinity churchwarden and local historian Andrew Westwood-Bate said they expected to “discover some bones while digging but this was completely unexpected”.

“The Victorians did a lot of work here and there are underground pipes brushing past the graves, but amazingly nothing had disturbed them,” he said.

He believes the skeletons are Anglo-Saxon, although Cambridge University Archaeological Unit experts who examined the site, said it was not possible to be precise as bones from consecrated ground could only be removed from the land in “exceptional circumstances”.

They dated the burials “broadly” to the 11th or 12th Century. Five of the skeletons were children.

Mr Westwood-Bate said that discovery was “one of the most moving moments” of the excavation.

The graves were dug into the chalk and bodies laid directly in the cavity. A mould of the grave of one child has been made as a memorial to previous “parishioners” of Hildersham.

It is thought the graves belong to villagers who lived outside the walls of what was probably an Anglo-Saxon church.

The exhumation was carried out with “great reverence” and “as little public knowledge as possible”, Mr Westwood-Bate said.

Each night the bones were stored in the mortuary at the village undertaker’s.

A “proper funeral” was conducted as the skeletons were laid to rest in one coffin. A headstone will be added later.