Some of the pictures are on loan to various museums

Thirty-eight paintings by Sir Winston Churchill are being offered to the nation, following the death of the politician’s youngest daughter in May.

Most of the pictures are currently on loan to the family home, Chartwell.

In her will, Lady Mary Soames expressed the wish that the paintings remain there.

They have been on display since the home in Kent opened to the public in 1966, a year after the wartime prime minister died.

The art historian David Coombs described the paintings as “a national treasure of major historical and artistic importance”.

They capture personal moments in Churchill’s life, including intimate family scenes and his love of gardens and holidays abroad, particularly in France. 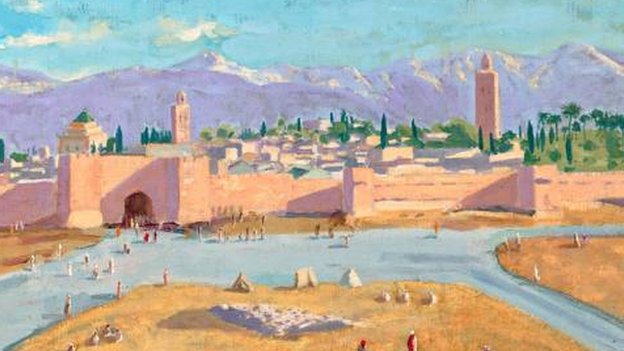 This painting was a gift to President Roosevelt

“They represent a side of Churchill that is rarely observed by the public,” said Mr Coombs.

The Churchill family has offered the pictures to the nation in lieu of inheritance tax. A decision by the government on whether it will accept this deal is expected next year.

Lady Soames wanted another picture – Coast Scene near Cannes (1935) – to remain in the House of Commons, and another at the Imperial War Museum’s Churchill War Rooms (View From a Bathing Hut at the Miami Surf Club, 1946), where they are currently on loan.

Churchill discovered painting when he was 40 and after that he rarely travelled without his paintbox. Painting helped him relax. It was “a friend”, he once wrote, “who makes no undue demands”.

He painted more than 500 pictures, which are now housed in museums and private collections around the world.

Knightmare is back for YouTube Geek Week, premiering Aug 5

Spice Girl Geri Horner to look back on...