The marriage of actor George Clooney and lawyer Amal Alamuddin has been sealed with a civil ceremony in Venice.

The couple went by boat to the city hall building where the brief procedure was conducted.

At the weekend, a host of famous guests including Matt Damon and Bill Murray attended a lavish wedding reception for the couple.

Clooney’s publicist broke the news of their nuptials in a brief statement to the press on Saturday.

The couple emerged from the town hall some 10 minutes after their arrival and were whisked away in a water taxi, surrounded by other boats and watched by well-wishers.

Clooney was dressed in a charcoal grey suit, while Alamuddin wore a smart-casual white outfit and a wide-brimmed sunhat. 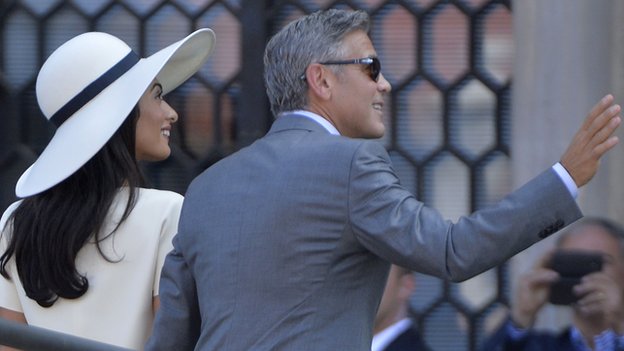 At city hall, the pair were officially married under Italian law by former mayor of Rome Walter Veltroni, a long-time friend of the film star.

Earlier in the day, he was seen getting ready for the ceremony at the Hotel Cipriani, where the wedding party have been staying.

The couple were engaged in April.

Clooney was previously married to Talia Balsam, who he divorced in 1993.

One of the world’s most recognisable actors, the American has two Oscars to his name: for best supporting actor in Syriana (2006) and for best picture as producer of Argo (2013).

Other than his film work, he has embraced human rights causes such as the Darfur crisis in Sudan.

Cumberbatch and Hamlet shine at awards

‘Suge’ Knight to stay behind bars