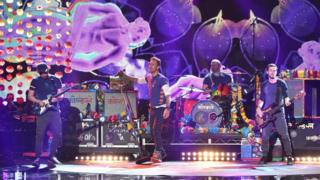 Coldplay are to headline the half-time show at Super Bowl 50 – with Chris Martin describing it as the “greatest moment” in the band’s career.

The frontman said the band was “excited and honoured and thrilled” to take part in next February’s event.

They revealed the news on Twitter, saying the show would reflect the past, present and the next 50 years ahead.

A record 118.5 million viewers in the US watched Katy Perry perform in this year’s half-time …read more