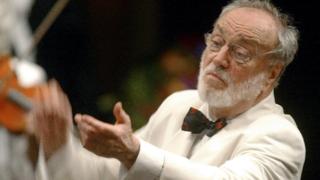 Kurt Masur, the German conductor who led the New York Philharmonic orchestra, has died in the US at the age of 88.

Masur was music director of the philharmonic from 1991-2002 and is credited with reinvigorating it.

Prior to that he led the Leipzig Gewandhaus Orchestra in eastern Germany for 26 years.

In the celebrations marking the reunification of Germany on 3 October 1990 he directed Beethoven’s Ninth Symphony.

City of Angels returns to London