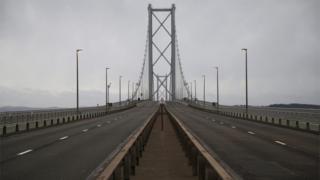 Businesses and organisations are making contingency plans after it was announced the Forth Road Bridge will be closed until the new year.

The closure has shut down the most direct route for vehicles travelling between Fife and Edinburgh.

The bridge will remain open to ambulances and police on emergency calls.

But more routine health service appointments could be affected by the closure.

BHS 'could file for administration'