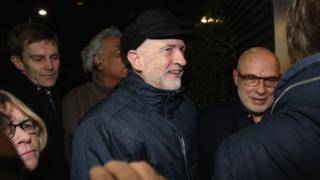 Mr Corbyn, seen here arriving at the dinner, recently stood down as Stop the War chairman

Labour leader Jeremy Corbyn has addressed a fundraising dinner for the Stop the War coalition, despite calls from some of his MPs not to attend.

Mr Corbyn said the group was a “vital force” and “one of the most important democratic campaigns of modern times”, which had brought “hundreds of thousands of people” to protests.

He described the Labour leader as part …read more

UK's 'hottest day of the year' could reach...

Windsor Castle barriers installed for Changing of the...