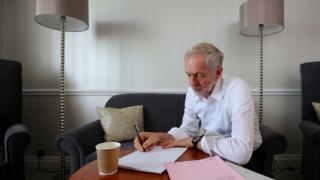 Jeremy Corbyn is to use his first conference speech as Labour Party leader to emphasise his patriotism and love for his country – and state most Britons share his values on life.

In his speech, he will says he was elected to pursue a “kinder politics” to achieve a “caring society”.

He will also say he will not impose “leadership lines” on his party.

Some of Mr Corbyn’s shadow cabinet do not agree with him on issues including the UK’s nuclear missile system.

Shadow defence secretary Maria Eagle is among the frontbenchers who think the Trident system should be renewed, but Mr Corbyn told a CND rally in Brighton he was “as committed as ever” to abolishing it.

The left-wing Islington North MP’s speech comes after he swept to victory in Labour’s leadership contest, having joined it as a 200-1 outsider.

In his first weeks as leader, he has promised …read more

Robinson to step down 'within weeks'