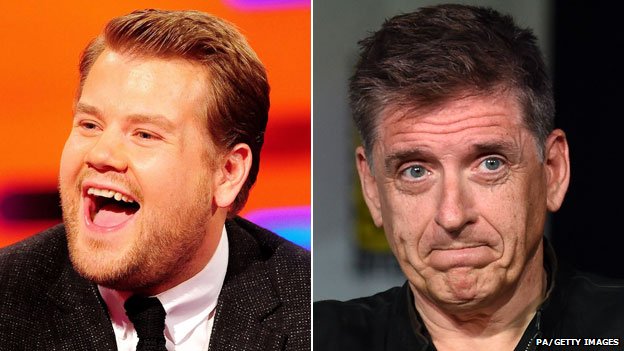 Actor James Corden has been confirmed as Craig Ferguson’s successor as host of The Late Late Show on American TV.

“I can’t wait to get started,” said the 36-year-old star of Gavin and Stacey.

He said he was “thrilled and honoured” to follow the “brilliant” Ferguson and that it was “hugely exciting… to host such a prestigious show”.

Corden will take over next year from Ferguson, who has been hosting the late-night talk show since 2005 and is stepping down in December.

Corden’s appointment was widely rumoured last month but has only now been confirmed by the CBS network.

His previous hosting experience includes four stints at the Brit Awards and his presenting role on the Sky panel show A League Of Their Own.

The actor’s profile in the US was boosted in 2012 when he won a Tony for his role in the Broadway transfer of stage hit One Man, Two Guvnors.

He was recently seen alongside Keira Knightley in the musical romance Begin Again and has a role in big-screen musical Into the Woods, out at Christmas.

In a statement, Corden said he would do his best “to make a show America will enjoy”.

British talent up for Golden Globes

Lost Hancock scripts to be staged