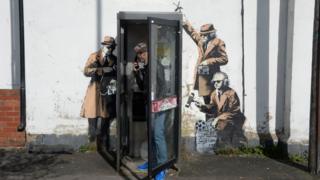 From the section Gloucestershire

The property’s owner has until April 2016 to reinstate walls, a chimney breast and wooden floors “apparently” damaged in an “abortive attempt” to remove the artwork

A deal to buy a Banksy mural on a house near GCHQ and place it in “safe hands”, is being negotiated by a local council.

The “unauthorised” mural was granted retrospective planning permission but has been repeatedly vandalised and with “apparent” attempts made to remove it.

L’Etoile at the Royal Opera House

Flags at half-mast for Tunisia dead

Labour 'would back tax credit U-turn'