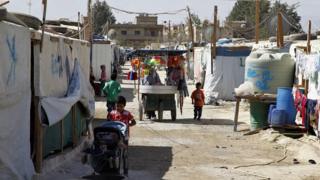 Refugees will travel to the UK from camps in countries neighbouring Syria, including Lebanon

The government says it is extending funding for councils to “assist” with the costs of helping Syrian refugees.

The government initially said it would extend an existing scheme, which covers the costs of refugees for 12 months, but councils asked for more funding.

The Home Office has now said “additional funding” will be offered beyond 12 months, but precise details have not yet been confirmed.