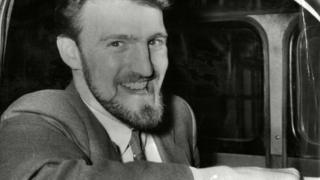 Jimmy Hill became Coventry City manager in 1961, setting them on their way from the Third Division to the First Division

He joined the club as manager in 1961, leaving six years later shortly after they had promoted to the First Division for the first time.

Tributes are being left at the statue of him outside Coventry’s home ground, the Ricoh Arena.

Rolex found after being lost in river