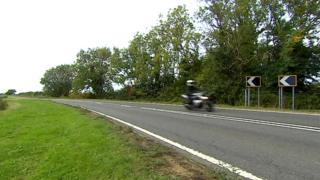 The crash happened on the B645 outside Tilbrook

Three police forces have apologised to a crash victim left in a ditch due to confusion as to which force should attend the call.

The biker crashed near Tilbrook, Cambridgeshire, which borders Bedfordshire and Northamptonshire, on Sunday.

The forces told the BBC they were investigating what went wrong.

The motorcyclist, who has not been named, crashed on the B645 close to the border of the three counties.