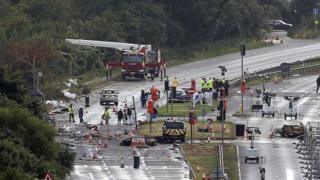 A jet that crashed during the Shoreham air show, killing 11 men, had expired ejector seat parts and an out-of-date technical manual, a report has said.

The Air Accidents Investigation Branch (AAIB) also said it could not determine if the aircraft met the requirements of its Permit to Fly.

A final report is still to be published, but seven safety recommendations have already been made.

The Hawker Hunter jet plummeted onto traffic on the A27 on 22 August.