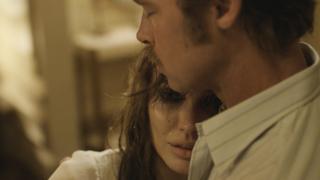 Critics slate Jolie and Pitt’s latest film By The Sea

Critics have given a lukewarm reception to Angelina Jolie’s By The Sea, in which she stars with husband Brad Pitt, calling it a “vanity project”.

Hollywood Reporter said it was “far too long” and suffered from “stasis and dramatic flatness”.

Variety added that it “it leaves the heart and mind coolly unstirred”.

No improvement for attacked journalist