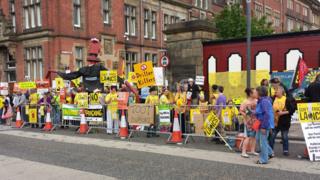 Cuadrilla appeal over Lancashire fracking refusal due to start

The shale gas firm Cuadrilla is to begin its appeal against the decision not to allow fracking at two sites in Lancashire at a public hearing later.

The company wants to extract shale gas at Little Plumpton and Roseacre Wood, on the Fylde Coast, in Lancashire.

Fracking – or hydraulic fracturing – was suspended in the UK in 2011 following earth tremors in Blackpool, where Cuadrilla previously drilled.

Both pro and anti-fracking protesters are expected to gather at the hearing, which is being heard at Blackpool Football Club’s conference suite and is expected to last five weeks.

Thousands without power after storms