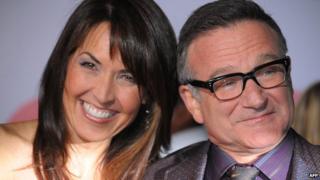 Wife Susan Schneider will remain in the home the couple shared

The wife and adult children of US comic actor Robin Williams have reached a settlement on his estate, lawyers say.

The out-of-court settlement has not been disclosed in detail, but brings to an end a legal battle that has raged since Williams’ suicide last year.

A lawyer for Susan Williams said she would stay in the San Francisco home she had shared with the actor.

A lawyer for the three children said they were pleased that the legal battle had now been ended.

Cause of fatal aircraft crash probed