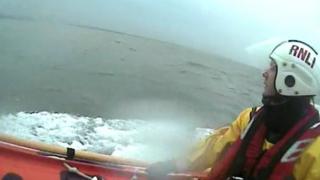 RNLI crews from Lytham St Annes, Blackpool and Fleetwood have taken part in the search

Debris has been found in the search for a light aircraft which went missing as it flew over the Irish Sea.

The aircraft, which had one person on board disappeared from radar three miles out at sea.

It had been due to land at Blackpool Airport at 09:15 GMT after its journey from the Isle of Man. The debris was found off the Lancashire coast.

The Maritime and Coastguard Agency said further searches had been suspended due to failing light.

Smith: I'd love to take Funny Girl to Broadway

Ice crack to put UK Antarctic base in...