The Design Museum will relocate in 2016, offering three times more space and a free permanent collection

London’s Design Museum will establish a free permanent collection from 2016, following its relocation to new premises in Kensington.

Chancellor of the Exchequer, George Osborne, confirmed the museum has been included in the current VAT refund scheme for museum and galleries.

He tweeted that it was “all part of our plan to make UK & London best place in world for creative industries”.

It usually costs £12.40 for adult entry to the museum.

The Design Museum, which currently sits on the River Thames near Tower Bridge, will relocate to the former Commonwealth Institute in two years’ time. The listed Kensington building has been largely unoccupied since 2001.

The new site will give the museum three times more space for its collection, temporary exhibitions and learning programmes. Visitor numbers are expected to more than double to 650,000 in the first year. 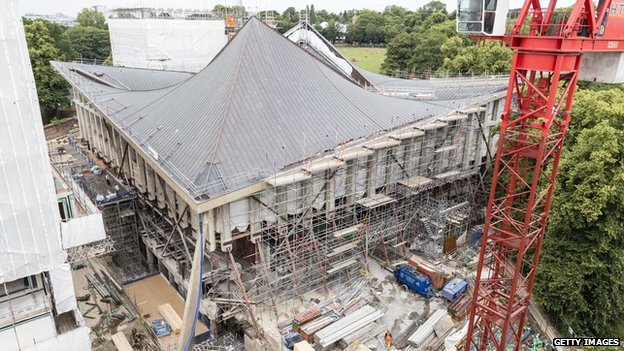 Building works are ongoing at the new site in Kensington

The museum will join more than 50 museums across London in opening its doors for free, including the National Gallery, the Tate Modern and the Natural History Museum. The VAT refund scheme currently supports around 120 museums and galleries across the country.

“The Design Museum is world-renowned for contemporary design and architecture, so it is fantastic news that they are moving to these brilliant new expanded premises in heart of London,” said Mr Osborne.

He added that he was “delighted to be offering help through the VAT refund scheme to ensure as many families as possible can visit at no charge at all”.

Designer Anya Hindmarch, a trustee of the museum, said the possibilities offered by the new premises would “cement London as the design capital of the world”.