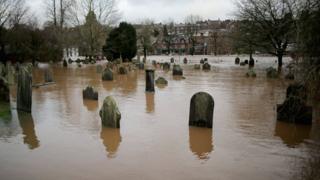 Three rivers in the north of England had the largest flow ever recorded in the country because of Storm Desmond.

The Eden, Lune and Tyne – in Cumbria, Lancashire, Tyneside and Northumberland – had flows of 1,700 cubic metres per second, the Centre for Ecology and Hydrology (CEH) said.

Normal rates are 36-53 cubic metres per second, it said.