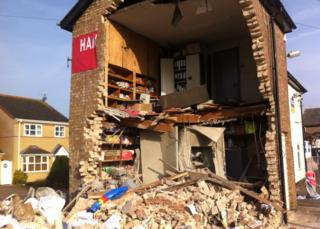 The ram raid happened at 02:55 BST according to Cambridgeshire Police

Ram raiders using a JCB digger and a forklift truck destroyed a petrol station building in a bid to steal a cash machine.

Police said the cash machine was left at the scene and it was not clear whether cash or anything else was stolen.

Two other trucks were also used in the raid.

A red car – possibly an Audi – was seen leaving in the direction of the Dog In A Doublet pub and Thorney, Cambridgeshire Police said.