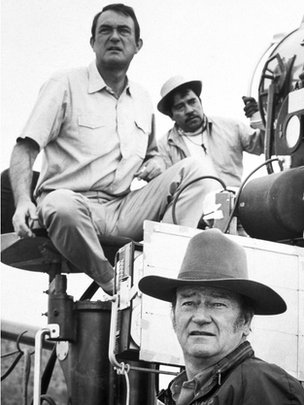 Director Andrew V McLaglen, who was best known for Westerns and action films including The Wild Geese and McLintock!, has died aged 94.

The film-maker worked regularly with John Wayne, directing the star in McLintock!, The Undefeated, Chisum, Cahill US Marshal and Hellfighters.

The news of McLaglen’s death was confirmed by the late actor’s estate, John Wayne Enterprises.

McLaglen was the son of Oscar-winning British actor Victor McLaglen, a former professional boxer who starred alongside Wayne in such classics as She Wore a Yellow Ribbon, directed by John Ford.

Andrew McLaglen was born in London in 1920 but grew up around Hollywood, where his father often took him on set. He learned the art of directing from greats like Ford, who eventually gave him a job as assistant director on the film The Quiet Man.

McLaglen later directed his father in The Abductors in 1957, as well as stars including Kirk Douglas in The Way West; Charlton Heston in The Last Hard Men; and Gregory Peck in The Sea Wolves.

His 1978 adventure The Wild Geese starred Richard Burton and Roger Moore as mercenaries in Africa.

His other film credits included comedy Fools’ Parade; The Ballad of Josie starring Doris Day and Peter Graves; Sahara with Brooke Shields; and Something Big with Dean Martin.

He was also at the helm for multiple episodes of classic TV Western series Gunsmoke, Rawhide and Have Gun – Will Travel. His last major film was 1989’s Return from the River Kwai.

Pharrell: Everything inspired by something