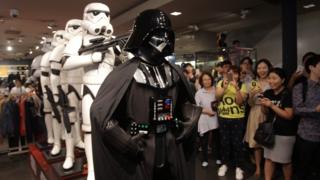 Disney shares fell over 4% in after-hours trading despite rising profits, as the performance of ESPN raised concern about the company’s outlook.

But profits for Disney’s cable networks fell by 5% as programming costs on the sports channel ESPN rose.

The bright spot was Star Wars: The Force Awakens, which helped to boost studio profits by 86%.

Star Wars: The Force Awakens has brought in more than $2bn at the box office alone, and sales of merchandise helped boost profits in the company’s consumer products section by 23%.

The slip in cable revenue took some of the wind out of Disney’s earnings announcement.

Profits for Disney’s media networks, which includes ESPN, ABC and the Disney Channel, fell to $1.4bn.

ESPN has seen its subscriber base fall in the …read more