An actress who alleged she was detained by Los Angeles police because of racial profiling after being found in a parked car with her boyfriend has been charged with committing a lewd act in public.

Police said its officers had responded to a report that a couple were exposed indecently inside a silver Mercedes.

Both Watts and her boyfriend have been charged with one count of lewd conduct.

The 28-year-old African-American actress and her white partner, Brian James Lucas, face up to six months in jail and a $1,000 (£621) fine if convicted.

Both remain free pending a further case hearing due to take place on 13 November. 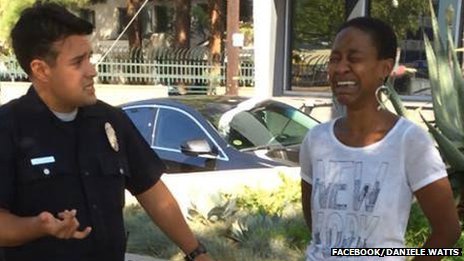 Watts used social media to complain about the 11 September incident in Studio City, north Los Angeles, claiming her rights had been violated.

In subsequent interviews Watts and her boyfriend, a celebrity chef who specialises in raw food, insisted they had only been showing public affection and that nothing improper had been taking place.

Watts and Lucas have since faced criticism for appearing to suggest their respective races played a role in the confrontation.