Doctors' dispute 'could become a war' 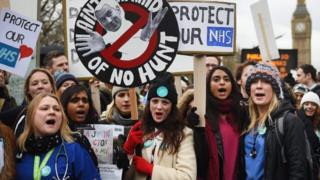 The dispute over the imposition of a new contract for junior doctors “could become a war” between NHS staff, employers and the government, the public service union has told the BBC.

“Everybody else is really worried that if they can do this to doctors, what does that mean for us?” said Ms McAnea.