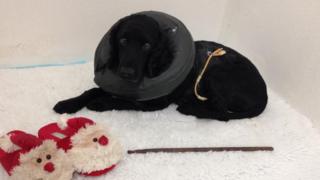 Dave the dog survives being impaled on metal spike

A family say their dog is lucky to be alive after becoming impaled on a rusty metal spike that went right through his body.

It happened when Dave the Cocker Spaniel ran into a bush – but fortunately the 18-inch (45cm) spike missed most of his organs.

Three veterinary surgeons were needed to remove the spike from his body and Dave had to spend a week at the vets.

May rules out powers on browsing data