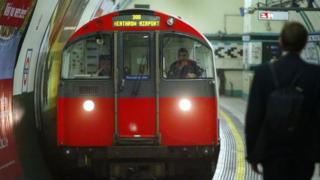 The door opened as the train approached Terminal 4 Heathrow, where passengers were taken off the train.

The Rail Maritime and Transport (RMT) union says it is the fifth time this has happened in two years, and is questioning the safety of the trains.

METER BRIDGE – IT WAS NOTHING + RODNEY CROMWELL REMIX

Boy in Halstead dies after being bitten by...