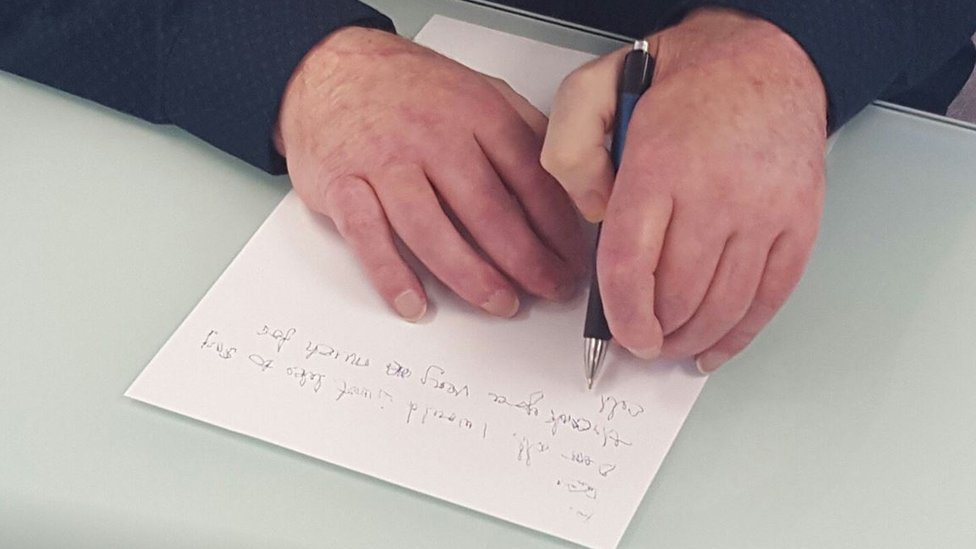 The first person in the UK to have a double hand transplant has written a letter of thanks to his surgeon, nine months after his pioneering operation.

Chris King, 57, of Doncaster, lost both hands, except his thumbs, in an accident at work four years ago.

He had the complex operation at Leeds General Infirmary in July.

The Leeds Rhinos fan is also looking forward to being able to clap when he goes to watch Leeds Rhinos.

Mr King can now do a range of tasks, including writing, making a cup of tea and gardening, and has progressed faster than his surgeon anticipated.

He next hopes to tie his own shoelaces and button up his shirt.

“It’s been going fantastically,” he said.

“I can make a fist, I can hold a pen, I can do more or less the same functions as I could with my original hands.”

A team of “unsung heroes” at Sheffield’s Northern General Hospital saved his life and enable the later transplant surgery, he said.

The hospital is hoping the procedure could one day be as routine as a kidney transplant.

Mr King said he wanted to again thank the family of the person who donated the hands.

He also encourage others to become donors and provide “this wonderful gift”.

George Osborne to quit as MP for Tatton