Downton goes up against EastEnders 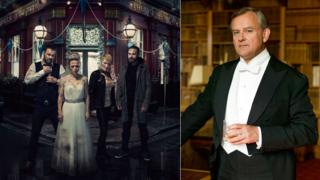 The last episode of Downton Abbey will go head-to-head with EastEnders in a Christmas Day TV ratings battle later.

An hour-long edition of the BBC One soap begins at 20:45 GMT, the same time the final two-hour instalment of ITV’s period drama begins.

When Downton Abbey went up against EastEnders on Christmas Day last year, the soap was watched by a consolidated audience of 8.6 million viewers.

Downton Abbey, in contrast, was seen by a total of 7.7 million.

Antonio Banderas: I had a heart attack