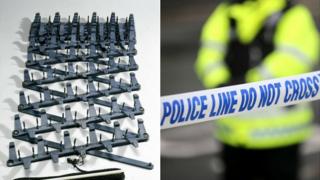 Stingers are used by police to burst the tyres of vehicles, usually when they are being driven by suspected criminals

Dozens of police officers have been injured while using so-called stinger devices, the BBC has learned.

Officers have suffered whiplash, fractures, cuts and back injuries while deploying the devices, which are used to burst the tyres of vehicles.

Hinkley Point expected to 'get go-ahead'