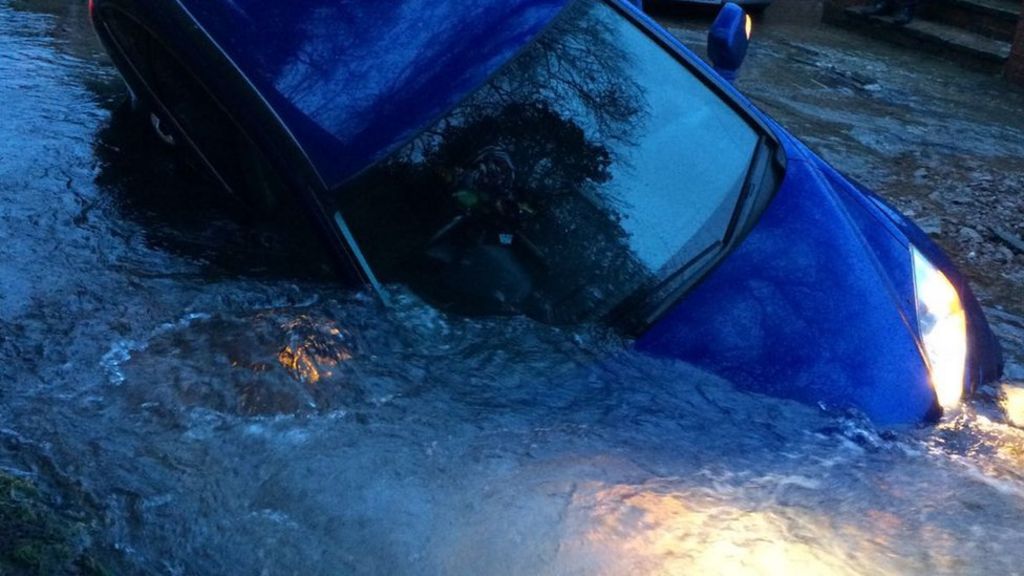 A driver has told how a sinkhole created by a burst water pipe “sucked the car across the road”.

Sally Hall said she was attempting to drive through an overflowing drain in Epperstone at about 06:45 GMT.

She said she was “frightened” when the water came “flooding in over my knees” and had to climb to safety.

Severn Trent Water (STW) said the fault had caused water supply issues in the village and wider areas, including Bingham and Radcliffe-on-Trent.

Some residents said they heard a “very big bang, like an explosion” when the water pipe burst at about 04:30 GMT on Sunday.

Mrs Hall said: “It was quite dark and there was a puddle of water. I thought it was a drain overflowing so went to drive through it.

“Then all of a sudden the car was sucked across the road and I ended up in the hole in the road.

“The water came flooding in over my knees and eventually the water was above the dashboard.

“It was fairly hard to escape… the car kept locking and unlocking itself so I had to get out of the passenger side which was difficult.”

Other areas affected include East Bridgford, Upper Saxondale and Flintham.

The water company said: “Due to the size of the water pipe affected, a lot of villages and towns in the area have been affected by the issue and left without water.

“We’ve managed to get more people back on supply… and we’ve got teams working hard to get everyone else on as soon as possible.”

STW added that said it could take a several hours before the water supply was restored to all homes.

Report on hand-trapped woman dragged by train at...