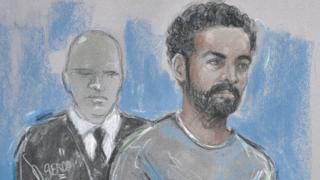 The partner of former EastEnders actress Sian Blake has been told he will stand trial in the autumn charged with murdering her and their two sons.

Arthur Simpson-Kent, of Erith, south-east London appeared at the Old Bailey by video link from Wandsworth Prison. He spoke only to confirm his name.

Ms Blake and her sons Zachary, eight, and Amon, four, were found buried in the garden of their home on 5 January.

There was no …read more