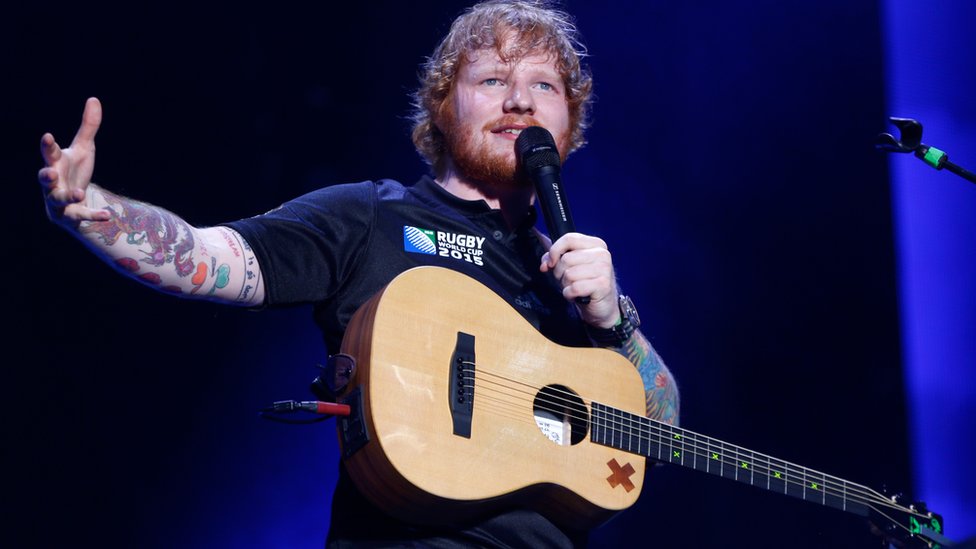 ]]> This site is optimised for modern web browsers, and does not fully support your version of Internet Explorer ‘;
$(‘.headerBar’).prepend(notify);
}

Two musicians based in California are suing Ed Sheeran for $20m (£13.8m) over his single Photograph.

Brit Martin Harrington and American Thomas Leonard claim it has a similar structure to their song, Amazing.

The two songwriters allege Ed Sheeran’s ballad from last year has the same musical composition to their track, which was released as Matt Cardle’s winning X Factor track in 2010.

Martin Harrington and Thomas Leonard say they wrote Amazing in 2009.

In documents, that include musical note comparison and chord breakdowns of the two songs, the pair claim the chorus of Photograph shares 39 identical notes with their track.

They say the similarities are “instantly recognisable to the ordinary observer”.

These are the chord structures of the choruses in Photograph and Amazing compared in court documents.

The court documents say that Photograph has sold more than 3.5 million copies worldwide.

It says it also features prominently in Hollywood drama Me Before You, released last week, as well as trailers for the film.

The copying of Amazing by Photograph is breathtaking in its deliberateness, magnitude, and hubris

The lawsuit says: “Given the striking similarity between the chorus of Amazing and Photograph, (the) defendants knew when writing, publishing, recording, releasing, and distributing Photograph that they were infringing on a pre-existing musical composition.

“The conduct of (the) defendants has been wilful from the inception of the creation of Photograph.

“The copying of Amazing by Photograph is breathtaking in its deliberateness, magnitude, and hubris.”

Imelda Staunton to star in Who's Afraid of...