Sheeran sold more than 1.5 million copies of his debut album + in the UK

Ed Sheeran has bucked the trend for criticising Spotify, saying his popularity on the site enabled him to play three nights at Wembley Stadium.

“My music has been streamed 860 million times, which means that it’s getting out to people,” he said backstage at the BBC Music Awards.

“I don’t think I’d be able to do that without Spotify.”

“For me, Spotify is not even a necessary evil. It helps me do what I want to do.”

The star’s comments come after artists like Taylor Swift and Thom Yorke pulled their music from the streaming music site.

Swift deleted her back catalogue from the service a week before her new album, 1989, came out – helping it become the first record to sell 1.287 million copies in the US, the highest first-week sales since 2002.

The singer, who has been romantically linked to Sheeran, has also criticised Spotify’s royalty rates, which average $0.007 (£0.0045) per play.

“Music is art, and art is important and rare,” she told the Wall Street Journal.

“Rare things are valuable. Valuable things should be paid for. It’s my opinion that music should not be free.” 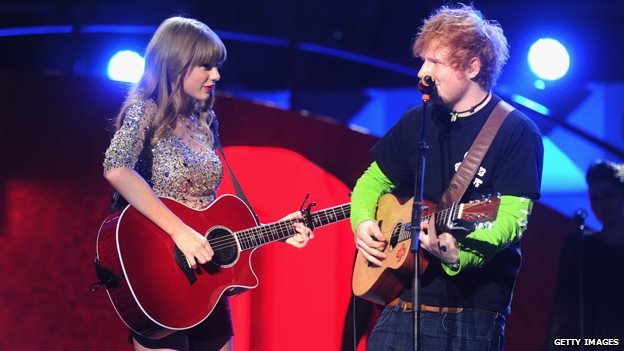 “I can understand where Taylor is coming from,” Sheeran conceded

She is not the first to protest. The Beatles, AC/DC and The Black Keys are all unavailable on Spotify, while earlier this week Paul McCartney told the BBC he worried about how young musicians would make a living under the streaming business model.