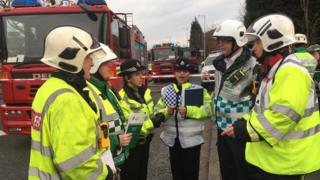 Police, fire and ambulance services are at the scene of the explosion

An elderly woman is trapped in rubble after an explosion at a house in Wolverhampton, police said.

West Midlands Fire Service said the property in Penn Road had “completely collapsed” and neighbouring homes had been evacuated.

Police originally said the woman had been rescued and taken to hospital, but later revised this.

Fire crews are working to free the woman, and the air ambulance is at the scene.

Details about the cause of the explosion have not been given.

London's unused water cannon to be sold by...

Paralympian 'dragged self' off plane