Writer and comedian Ben Elton has said his most recent novel was partially inspired by Michael Gove.

His new book Time and Time Again sees a man travel back in time to stop WW1.

Blackadder Goes Forth, set in the trenches and starring Rowan Atkinson as the titular scoundrel Edmund Blackadder, was first screened in 1989 and is generally regarded as a TV classic, winning the Bafta for best comedy series.

Writing in the Daily Mail in January, Mr Gove said the comedy “portrayed the conflict as a series of catastrophic events perpetrated by an out-of-touch elite”.

Elton, who has written several best-selling novels, was scouting around for inspiration when the cabinet minister made his comments.

“I had been toying with the idea of writing a novel about the causes of the First World War but I certainly got some led in my pencil when myself, Richard and Rowan Atkinson were all being blamed for a lack of respect for WW1 because of Blackadder,” he said. 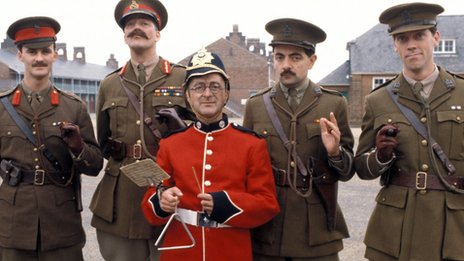 Blackadder Goes Forth was set in the trenches of WW1

His new novel Time and Time Again is a swashbuckling adventure story which follows ex-soldier Hugh Stanton as he travels back through time to the summer of 1914 in a bid to stop the Great War.

The historical detail is mixed with science fiction and satirical humour.

Friedman and Giedroyc for Sound of Music

Presley’s private jets up for sale