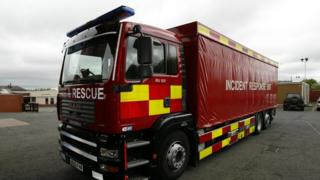 A third of emergency vehicles equipped to deal with major contaminations in England, including “dirty bombs”, are to be withdrawn on 31 December, according to a leaked document.

Some 22 incident response units (IRUs) are to be withdrawn following a review that found 43 would be sufficient.

Labour said the move risked security and called for it to be put on hold.

The government said it was better to give front-line responders training to deal with contaminations.

Conservative leadership race: First round of voting to...