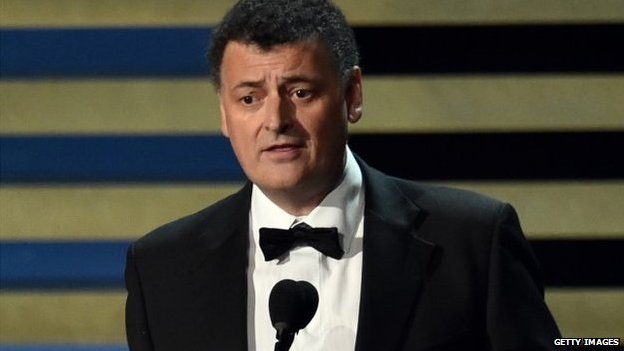 Steven Moffat accepted the award onstage at the Emmys

Sherlock writer Steven Moffat and actors Benedict Cumberbatch and Martin Freeman have won Emmys for the final episode of the latest series.

Julia Louis-Dreyfus and Jim Parsons also won early awards for lead actress and actor in a comedy during the broadcast of the annual awards show.

The wins were the third and four respective trophies for the comedians.

Orange Is the New Black and House of Cards are looking to become the first online-only show to win an Emmy.

Host Seth Meyers nodded to the broadcaster television being eclipsed in the awards by cable and online offerings during the beginning of the ceremony at the Nokia Theatre in Los Angeles.

Meyers said the Emmys had moved to Monday to avoid a conflict with the MTV Video Awards, but that MTV does not specialise in music videos anymore.

“That’s like network TV holding an awards show and giving all the trophies to cable and Netflix. That would be crazy,” Meyers joked.

Moffat won for best writing in a miniseries, movie or dramatic special, for the BBC’s “Sherlock: His Last Vow”, which aired on public broadcaster PBS in the US.

Cumberbatch and Freeman won best supporting actor in a miniseries or movie for the same episode.

Neither were present to accept the award but Moffat came on stage to thank his wife and producer Sue Vertue and Sherlock co-creator Mark Gatiss.

Roman Polanski pulls out of Cesars jury after...