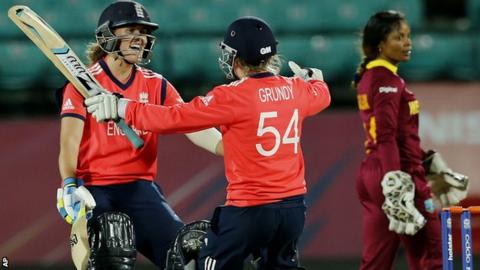 With seven needed off the final over, Anya Shrubsole scored four from two balls but was then bowled. A wide, a Rebecca Grundy single and a scrambled bye then got England home.

England will reach the semi-finals if they beat Pakistan on Saturday.

The 2009 champions will also secure a place in the last four if West Indies fail to beat India earlier on the same day.

Charlotte Edwards’ side only just managed to scrape past India on Tuesday, with Shrubsole required to hit the winning runs with six balls to spare.

Here, the finish was closer, and also echoed the thrilling match between India and Bangladesh in the men’s tournament 24 hours earlier.

On Wednesday, in exactly the same situation, India wicketkeeper MS Dhoni ran to the stumps to run out Mustafizur Rahman and win the match for his team. Here, Merissa Aguilleira threw and missed, giving England victory.

Against India, and chasing only 90, England fell from 62-3 to 87-8 before sealing victory.

Here, the collapse was just as dramatic, with middle-order problems looking to be a serious obstacle to England winning the World T20 for a second time.

Tammy Beaumont and Charlotte Edwards appeared to have England cruising with an opening stand of 59, albeit if they were fortunate to survive a stumping and caught-behind appeal respectively.

However, after Beaumont was harshly adjudged lbw to Shaquana Quintyne, England imploded in an …read more

'Down to the bone' model's health alert