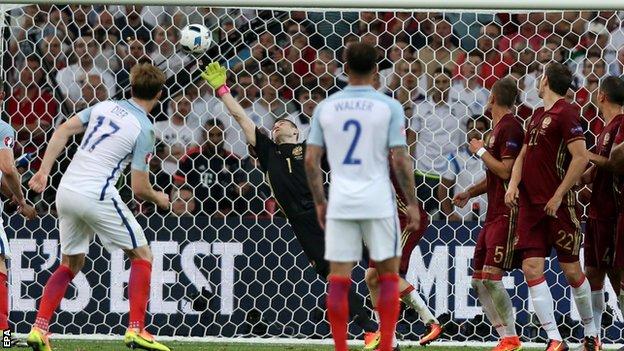 England once again failed to start a major tournament with victory as Vasili Berezutski’s stoppage-time header gave Russia a draw they barely deserved in the Stade Velodrome.

Roy Hodgson’s side were dominant and fully merited the lead given to them when Eric Dier crashed a 20-yard free-kick high past keeper Igor Akinfeev with 17 minutes left.

Hodgson then removed man of the match Wayne Rooney, who had earlier seen a shot pushed superbly on to the post by Akinfeev, and replaced him with Jack Wilshere to preserve England’s advantage.

It was a move that failed when Russia snatched a point – and extended England’s record of never starting a European Championship with a win – two minutes into four minutes of stoppage time, Berezutski soaring above Danny Rose at the far post to send Georgi Schennikov’s header looping over keeper Joe Hart.

The final whistle was the cue for more of the violence that has marred the build-up to this fixture, as Russian fans appeared to charge at English supporters behind the goal where Berezutski scored.

England manager Roy Hodgson got plenty right with a positive selection and the decision to play Rooney in midfield reaped a rich reward – but his boldest move may also have been his biggest mistake.

He removed Rooney straight after Dier’s goal and introduced Wilshere in an attempt to retain possession, but Rooney was the player giving England control and while it was a warm night in the south of France, the 30-year-old looked fresh and fit for the fight.

True, it was a sucker punch that cost England victory but experience is needed to close out crucial wins and ultimately they did not manage it.