Home News England out of Euro 2016 after Iceland loss
News 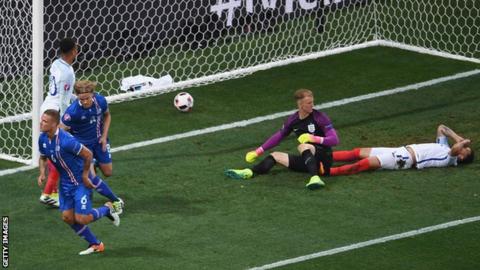 England suffered a humiliating exit from Euro 2016 as they went out to minnows Iceland in the last 16.

Wayne Rooney put England in front with an early penalty after Raheem Sterling was fouled, only for Ragnar Sigurdsson to equalise almost immediately.

And Kolbeinn Sigthorsson gave Iceland – a nation of 330,000 people – the lead with a shot Joe Hart should have saved.

England, devoid of attacking ideas, rarely threatened and Iceland will face hosts France in the quarter-finals.

Attempt missed. Dele Alli (England) header from the centre of the box misses to the right. Assisted by Harry Kane with a cross following a corner.

Ragnar Sigurdsson (Iceland) wins a free kick in the defensive half.

Attempt missed. Kári Arnason (Iceland) header from the centre of the box is close, but misses to the right. Assisted by Johann Berg Gudmundsson with a cross following a corner.

Attempt saved. Aron Gunnarsson (Iceland) right footed shot from the right side of the box is saved in the top right corner. Assisted by Johann Berg Gudmundsson.

Gary Cahill (England) wins a free kick in the defensive half.