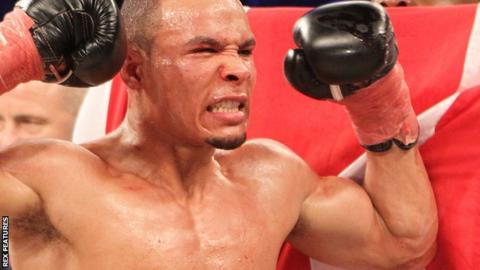 Nick Blackwell was taken to hospital after being beaten by Chris Eubank Jr in their British middleweight title fight in London.

The referee stopped the fight in round 10 on the advice of the doctor, who said Blackwell was unable to continue because of swelling over his left eye.

The Trowbridge fighter was later taken from the ring on a stretcher.

“I hit him with some big shots, maybe the referee should have stopped the fight earlier,” said Eubank Jr.

The Brighton challenger had dominated the fight, bloodying the champion’s nose in rounds three and four with a flurry of jabs and uppercuts.

The challenger was also on top in round five but he was caught with a right after pointing a glove in the direction of Billy Joe Saunders – the only man to beat Eubank Jr – who was at ringside supporting Blackwell.

Eubank Jr continued the onslaught at the start of the following three rounds but each time Blackwell kept his guard high and continued to move forward, catching his opponent with the occasional chopping right.

Round nine was a quieter affair but Eubank Jr used his jab to keep Blackwell at bay and the 10th was also more pedestrian until the referee stepped in and called the doctor over.

“This is what boxing needs, two warriors who stand and fight,” added Eubank Jr on Channel Five.

“I have respect for anyone who steps in the ring. It’s sad that he had to leave on a stretcher. All I wanted was his belt and I’ve done that. I’ve achieved my dream of becoming a British champion.”