Euro 2016: Gareth Bale says Wales have no regrets over elimination 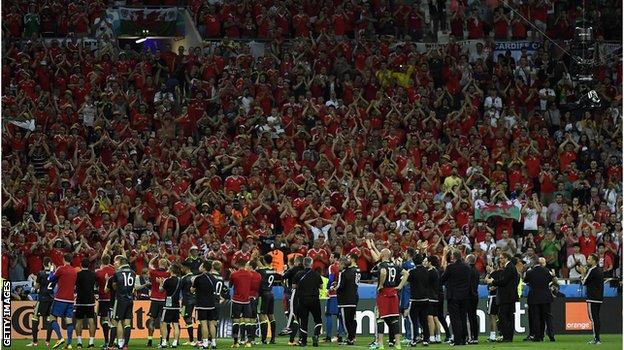 Gareth Bale says Wales “can have no regrets” after a 2-0 loss to Portugal in the Euro 2016 semi-final ended their hopes of a first major tournament win.

“We have to be proud of ourselves,” the forward said. “We have given everything on the pitch and off the pitch and tried to enjoy the experience.”

Prime Minister David Cameron said Wales had “inspired a nation and made Britain proud” with their exploits in France.

First Minister of Wales Carwyn Jones said he was “sad it’s over” but “very proud again”.

Chris Coleman’s side upset the odds to reach the last four as the likes of England, Italy, Spain and Croatia were knocked out in earlier rounds.

But he admitted: “It hurts that we lost. The players are gutted, but they need to look back and see they have done their country proud.”

How the players rated

Reaching the semi-finals was a historic moment for Wales.

Their previous best tournament result came in 1958, when they reached the quarter-finals of the World Cup in their last appearance at a major finals.

After a goalless first half, Cristiano Ronaldo broke the deadlock on 50 minutes with a magnificent header.

Three minutes later, his shot was diverted past Wayne Hennessey in the Wales goal by former Manchester United team-mate Nani.

Wales began the tournament as one of the outsiders but caused a shock by topping Group B, finishing above England despite losing to their neighbours.

They then edged past Northern Ireland in the last 16 before upsetting a highly regarded Belgium side 3-1 in the last eight.

Their exploits earned rave reviews back home, securing a good luck message from the Prince of Wales before Wednesday’s game against Portugal.