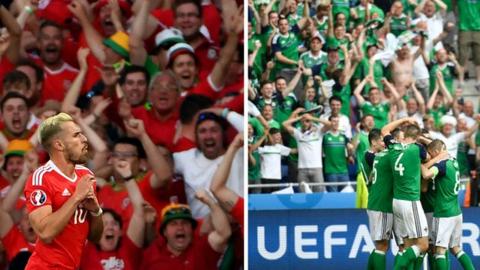 Wales and Northern Ireland are set for a historic meeting on Saturday as they each attempt to reach a first European Championship quarter-final.

The last-16 tie in Paris is the first time two home nations have met in the knockout stages of a major tournament.

Wales finished above England to win Group B, with Northern Ireland qualifying from Group C as one of the best third-placed teams.

Thousands of Wales and Northern Ireland fans are expected in Paris.

“It’s a one-off game now and we’ll go into it thinking we can get a victory,” said Northern Ireland striker Kyle Lafferty.

Wales manager Chris Coleman said: “It will be about who handles that spotlight the best, who’s capable of performing under that pressure and tension.”

There is further home nations interest in the match as England’s Martin Atkinson will be the referee.

Where Wales v Northern Ireland will be won and lost

Nations ready for the big stage

With both nations having limited tournament experience over the years, it is not surprising Saturday’s game will be their first meeting at a major finals.

There have been four World Cup or European Championship qualifiers, countless British Home Championship games and the odd friendly – but nothing matching the pressure and intensity of a knockout tie.

Wales go into the match with the historical advantage, having won 15 of their 34 previous meetings since 1953 – when Fifa ruled Northern Ireland and the Republic of Ireland must compete under separate names.

Northern Ireland have not beaten Wales in eight attempts, a winless run stretching back to a 1-0 Home Championship victory in May 1980.

Head to head (since 1953)WalesDrawsNorthern Ireland15127

While Michael O’Neill’s men will not dwell on results from previous generations, they do have a recent gauge of the challenge provided by their Welsh opponents.

The nations met in a pre-Euro 2016 friendly just three months ago when Wales nicked a late 1-1 draw in Cardiff.