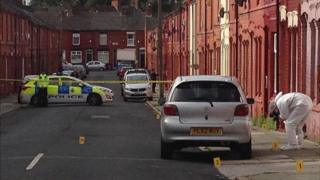 A Liverpool street has been closed after two improvised explosive devices were found outside a home.

Police were called to Goswell Street, Wavertree, at 22:50 BST on Tuesday amid reports that a fire had damaged the front door of a house.

It had been caused by an explosive device and a second device was found outside the property, police said.

The Army’s explosives disposal team removed the device and the road remains closed as an investigation continues.

There were no reports of any injuries, Merseyside Police said.

A spokesman for the force said: “At this stage of the investigation the motive for the incident is unclear and enquiries are ongoing.

“Officers will be speaking …read more

E-cigarettes 'should be prescribed'