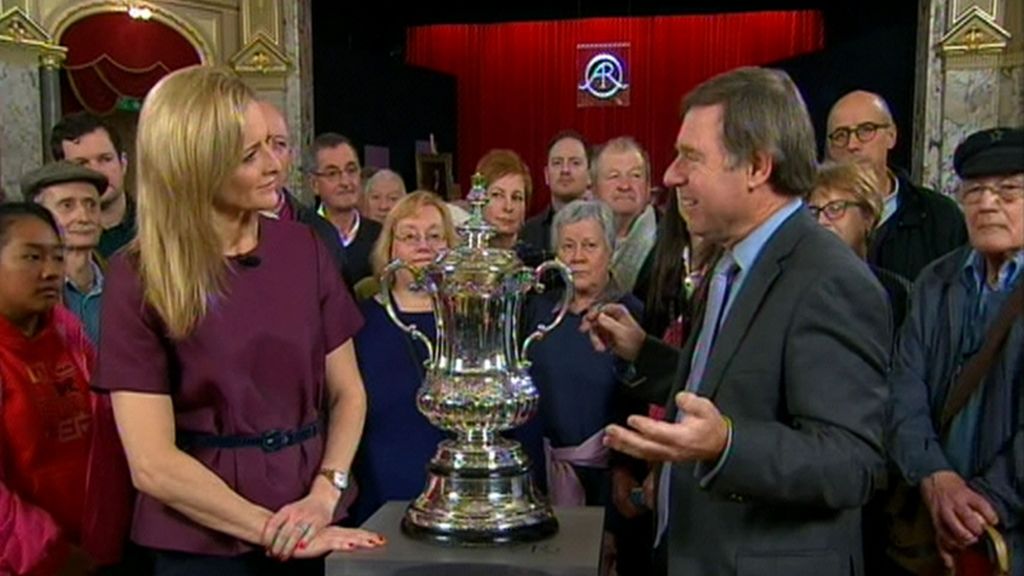 The longest-serving FA Cup trophy has been valued at more than £1m on the Antiques Roadshow – making it the BBC show’s most valuable item.

The cup was presented to winning teams from 1911 until it was replaced in 1992 by a new trophy of the same design.

It was valued in an edition of the long-running programme recorded in Harrogate and shown on Sunday evening.

The show’s previous highest valuation was £1m for a model of Sir Antony Gormley’s Angel of the North sculpture.

The cup valued by Antiques Roadshow expert Alastair Dickenson at Harrogate’s Royal Hall was the third version of the FA Cup to be used.

It was made by Fattorini and Sons in Bradford and – by coincidence – the first team to be presented with it were Bradford City, who beat Newcastle United in the 1911 final, after a replay.

The history of the FA Cup trophies

The original FA Cup trophy, presented at the first final in 1872, was stolen from a Birmingham shoe shop window in 1895 while being displayed when Aston Villa were holders.

The second was replaced by the Football Association (FA) after 1909 winners Manchester United made a replica and the FA realised it did not own the copyright. The obsolete cup was given to Lord Kinnaird, who had been president of the FA for more than two decades.

It was bought at auction for £478,000 in 2005 by David Gold, then chairman of Birmingham City and now of West Ham United, and presented for permanent display at the National Football Museum, now based in Manchester.

The replacement – the trophy featured on the Antiques Roadshow – was used for every final from 1911 until 1991 when it was decided it was too fragile to continue being used.

It was succeeded by an exact replica but …read more

Stabbed teacher 'feared he would die'