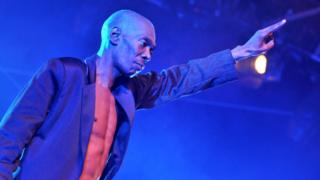 Dance act Faithless have scored the third number one of their career, with the remix album Faithless 2.0.

It features new versions of the band’s most famous tracks, including God is a DJ and Insomnia, reworked by producers like Avicii and Tiesto.

In the singles chart, Justin Bieber achieves a fifth week at number one with his hit song Where Are You Now?

There are also new entries for Olly Murs and The 1975, while The Weeknd and Jamie Lawson climbed into the top 10.