Author Helen Macdonald has won the £20,000 Samuel Johnson Prize for Non-Fiction for her book about how becoming a falconer helped her deal with grief.

H is for Hawk – described as “a book unlike any other” by the chair of the judging panel – is the first memoir to win the award, now in its 16th year.

In it Macdonald reveals how training her own goshawk helped her come to terms with the death of her father.

The poet and historian beat five other titles, three of them by women.

This year’s shortlist, which included a biography of Roy Jenkins and a look at life in Vichy France, marked the first time female authors had outnumbered their male counterparts.

Speaking ahead of Tuesday’s announcement, Macdonald, who lives near Newmarket, Suffolk, said she had developed an “obsession” with birds of prey from a young age.

After her father’s sudden death, though, she became “desperate” to train a goshawk – a species, she said, that has “a reputation for being ruffians – psychopathic, bloodthirsty slayers”. 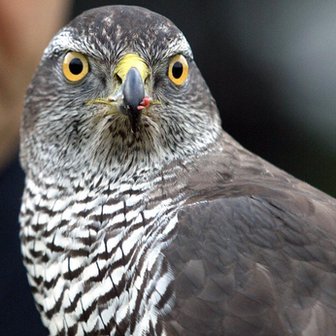 Goshawks are fearless and determined predators

H is for Hawk recounts how she trained a female called Mabel, whom she said represented “all the things I wanted to be in that state of grief”.

“She had no past or future, she just lived in the present. She was incredibly ferocious and full of life.

“I spent so much time with her I started to forget what it was like to be human at all.

“I ended up feeling like I was more like a hawk than a person. It really made me think very deeply about life and death.”