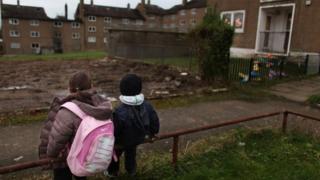 High rents and mortgages in England mean too many families are skimping on heating and winter clothes to make ends meet, says housing charity Shelter.

More than a quarter (27%) of 853 parents of under-18s said they had cut winter spending to meet housing costs.

And 10% told researchers they feared being unable to pay rents or mortgages in January.

The government said its work to tackle the deficit …read more

Teen, 16, stabbed to death in street